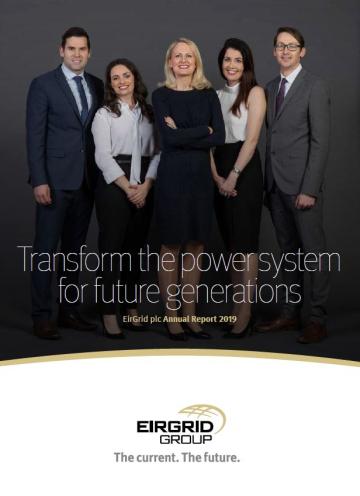 EirGrid Group has published its Annual Report for 2019

The increase was mainly due to the regulatory over-recovery of revenue which will be adjusted for in future accounting periods.

Disregarding these statutory adjustments, the underlying profit before tax for the Group was €22.3m in 2019 on revenues slightly down at €747.8 million.

This has enabled the group to deliver a €4 million dividend to the Exchequer, the same as last year.

EirGrid Group operates and develops the electricity system in Ireland and Northern Ireland. This comprises the grid, the wholesale electricity market and interconnection with other power systems.

Brendan Tuohy, Chairperson of EirGrid Group, said: “The past year has seen a significant increase in the recognition of the scale of the challenges posed by climate change. There is also now a widespread acknowledgement of the urgency required to address these challenges.”

He added: “The transition required to achieve climate change targets can only be realised with major societal change, together with individual behavioural change. New and strengthened electricity grid infrastructure will be essential, including the critical North South Interconnector and the support of the local communities will be very important if this infrastructure is to be delivered. Over the next five years, an investment of €2 billion and £500 million will be required in the respective grids in Ireland and Northern Ireland.”

In Ireland, EirGrid now has the key target of meeting 70% of electricity demand from renewable sources by 2030. This target, as set out in the Government’s Climate Action Plan, published in June 2019, provides a clear focus for the organisation in the years ahead.

SONI, which runs the Northern Ireland electricity system, is responding to the UK Government’s goal of achieving net zero carbon emissions by 2050.

Mark Foley, Chief Executive of EirGrid Group, said: “2019 was a notable year for EirGrid Group. The highlight was the development and publication of the EirGrid Group Strategy 2020-2025”.

“A transformation of the power system is afoot due to the disruptive effects of climate change. EirGrid Group will be at the forefront of a revolution that will impact every individual on the island of Ireland. Electricity from renewable sources is going to play a pivotal role in this island’s response to the climate crisis. That is the motivation behind our new strategy.”

In Northern Ireland, over 40% of electricity consumption was generated by renewable sources in the twelve months to September 2019. Ireland operated with an average of 36% of renewables on the system in the same period.

Throughout 2019, EirGrid Group continued to operate a safe, secure and reliable power system. This was achieved while overseeing the first year of the restructured all-island wholesale electricity market, which is now integrated with the European electricity market.