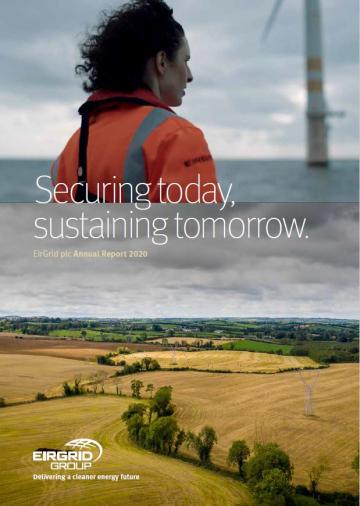 Download a copy of the 2020 Annual Report by clicking on the above image.

EirGrid Group has today published its annual report for 2020 under the theme “Securing today, Sustaining Tomorrow”.

During the year, group revenues were €688.4 million and profits before tax were €14.0 million. Profits after tax were €11.9 million.

As a result, EirGrid can deliver a proposed dividend of €4.0m to the shareholder, which is in line with previous years and with shareholder expectations.

EirGrid Group operates and develops the electricity system in Ireland and Northern Ireland.

Brendan Tuohy, Chairperson of EirGrid Group, said: “The year was in two distinctly different parts – the five months, from October to the end of February, which were relatively normal, and the remaining period to the end of September, which presented some unprecedented challenges for society and every organisation, including our own. Thankfully, as an organisation, EirGrid Group responded well to these challenges and, besides dealing well with the immediate challenges, progress continued to be maintained on the longer-term projects which will be critical to underpin the decarbonisaton of the electricity system.”

In the last year, EirGrid oversaw the first auction for the Department of Communications, Climate Action and Environment’s Renewable Electricity Support Scheme (RESS).

Mark Foley, Chief Executive of EirGrid Group, said: “This represents a really excellent start for the Irish Government’s Climate Action Plan, delivering a substantial quantity of new capacity but also adding diversity in terms of technologies and rewarding communities for their endeavours and willingness to become part of this vital new ecosystem. It is very exciting and a positive step towards reaching our 2030 target.”

The past financial year was the first year of the EirGrid Group Strategy (2020-2025). The strategy is aimed at de-carbonising the island’s electricity system, with a key target of delivering 70% renewable energy on the power system in Ireland by 2030, as set out in the Government’s Climate Action Plan, 2019.

"2020 was a significant year for EirGrid Group for the very real reason that we played our part through the global pandemic, keeping the power flowing while keeping our people safe."

In 2020, Minister for the Economy in Northern Ireland, Diane Dodds MLA, announced an interim target of at least 70% by 2030, aligning with the target set for Ireland.

During the year, EirGrid Group continued to make progress towards these renewable energy targets, with EirGrid and SONI operating the power system with an average of 43% of electricity coming from renewable sources, exceeding the target of 40% set by Government.

Mr Foley added: “2020 was a significant year for EirGrid Group for the very real reason that we played our part through the global pandemic, keeping the power flowing while keeping our people safe. The pandemic created a very challenging context for the first year of Strategy 2020-2025 but, despite this challenge, our organisation continued to maintain focus on the key goals that underpin the delivery of our strategy.”

Notes to the Editor

Our high-voltage network brings power from where it is generated to where it is needed, at the most economic price possible. We are responsible for providing a safe, secure and reliable supply of electricity: now, and in the future.