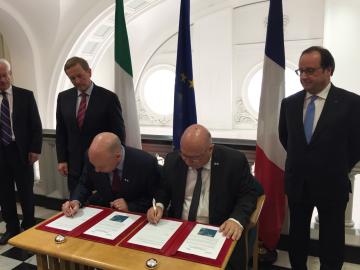 On the occasion of François Hollande’s visit to Ireland on 21st July 2016, the French President and An Taoiseach Enda Kenny have launched the next stage of the Celtic Interconnector, a proposed €1bn sub-sea electricity cable linking Ireland and France.

The capacity of the Celtic Interconnector is estimated at approximately 700 megawatts (MW), enough to power 450,000 households, and is being studied by EirGrid and its French counterpart Réseau de Transport d’Électricité (RTE).

It would improve security of electricity supply in Ireland and France by providing a reliable high-capacity link between the two countries; increase competition in the all-island Single Electricity Market; and support the development of renewable energy, particularly in Ireland.

It is also a substantial step forward in the completion of the Ireland-France Sustainable Energy Roadmap, which both RTE and EirGrid intend to further actively support with all relevant stakeholders.

Following the completion of feasibility studies over the past five years, EirGrid and RTE today agreed to progress the project to the next phase of its development, "Initial Design and Pre-Consultation"

This latest phase will take two years and comprises an in-depth economic assessment of the project; technical studies and initial technical design specifications; environmental studies; and pre-consultation in preparation for permit granting procedures in France and Ireland.

It will also include the investigation of landing points for a subsea cable and connection points to the electricity transmission grids in France and Ireland.

Fintan Slye, EirGrid Chief Executive, said the project would generate savings through more efficient use of the existing electricity grid in Ireland: “It will improve security of supply on the island of Ireland and increase competition, driving down prices for customers.”

François Brottes, Chairman of the RTE board, said: “This project shows the importance of the cooperation between transmission system operators for the success of the energy transition and for the development of the European Energy community.”

Upon completion of the “Initial Design and Pre-Consultation” phase, EirGrid and RTE will then decide whether to progress to the next phase of development, culminating in a final decision as to whether or not to proceed with construction of the project. Should it progress, the interconnector will go live in 2025.