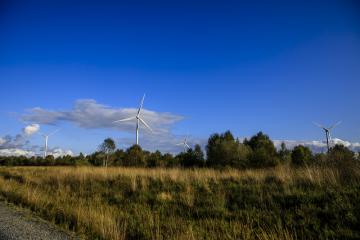 Renewable generation accounted for 43% of all electricity consumed in Ireland during 2020, as EirGrid works to facilitate increased amounts of renewable energy on the grid at any one time.

Statistics compiled by EirGrid, operator of the national electricity grid, show that the use of renewable electricity jumped from 36% in 2019 to 43% last year.  Wind generation accounted for most of the renewables, along with small amounts of hydro, bio energy, ocean energy and “renewable combined heat and power”.

In order to achieve binding EU targets for renewable energy by 2020, the Government stipulated that 40% of electricity consumption must come from renewable sources.

The statistics show that gas-powered generators remain the largest source of power, generating 50% of electricity during 2020, down from 52% in 2019. There were also small amounts of coal, peat and oil-powered generation during the year.

Mark Foley, EirGrid chief executive, said: “This is a significant milestone and demonstrates that Ireland is a world leader in renewable energy. We are now moving onto our next target, delivering at least 70% of the island’s electricity from renewable sources by 2030.”

Key to achieving this is EirGrid’s ability to operate the power system with increasing amounts of electricity coming from variable, renewable generation sources, such as wind and solar, at any given moment.

These renewable generators present a range of operational challenges for the power system. The technological characteristics of wind generation are different to traditional generation sources such as gas and coal. Wind and solar generation, which are dependent on weather conditions, are also inherently variable, and this must be managed to ensure demand for electricity is always met.

This has meant that EirGrid has historically had to limit the amounts of variable renewable generation on the power system.

EirGrid engineers have been tackling the problem in recent years and have just completed a successful trial, in association with electricity the industry, under which we have increased the allowable amount of instantaneous variable renewable generation to 70%. The figure had been capped at 65% for the two years prior to this.

Mr Foley explained: “This is a significant milestone in delivering on our ambition of at least 70% of the island’s electricity coming from renewable sources by 2030. Last month we launched the Shaping Our Electricity Future consultation to seek views from the public, industry and others about the various approaches we could take to achieve this goal. More information is available at consult.eirgrid.ie. It is essential that we ready our grid to be able to take more renewable power and in the coming months we will commence a trial of operating the power system with a cap of 75% of demand being met from variable renewable generation at any moment in time. This is a considerable operational challenge and at EirGrid we are very focused on making this happen.”