What is the Celtic Interconnector?

The Celtic Interconnector is a planned subsea (undersea) link to allow the exchange of electricity between Ireland and France. Since 2011, EirGrid has been working with its French equivalent Réseau de Transport d’Electricité (RTE) to find the best way to develop the interconnector to benefit electricity customers and markets in Ireland, France and the EU. We are working together to deliver the Celtic Interconnector, which, if built, is due to be completed in 2026. As Ireland’s state-owned transmission system operator (TSO), part of EirGrid’s role is to explore and develop opportunities to interconnect the transmission grid with the transmission grids in other countries.

This page tries to answer your questions in terms of:

Keep up to date and contribute

You can keep up to date on progress at our ‘What’s happening now page’.

As part of our six-step approach to developing projects, EirGrid asks for regular feedback from the public and other stakeholders. We look forward to your contributions as we progress.

We are now at Step 5 – The Planning Process and estimate that this will continue until 2022. Step 6 – Construction, Energisation and Benefit Sharing is scheduled to take place from 2022-2026.

Why is the Celtic Interconnector important and what are its expected benefits?

The Celtic Interconnector will help to develop an integrated energy system for the European energy market. Such a system would mean electricity could move around more efficiently to the places that need it. There are similar interconnectors between Ireland and Wales, Northern Ireland and Scotland and between many other countries across Europe.

A fully integrated energy market will help the EU to:

If built, the Celtic Interconnector will bring many benefits for Ireland, France and the EU. It will:

What kinds of feasibility studies were completed?

In 2009, our ‘Interconnector Economic Feasibility Report’ identified an interconnector with France as a good option to continue to integrate the European electricity system, and benefit Irish consumers.

In our feasibility studies, we considered the best route for the subsea cable to allow the exchange of electricity between the south coast of Ireland and the north-west coast of France.

You can read the feasibility studies carried out at different stages of the project to date on our ‘Documents’ webpage.

What technology would be involved in the interconnector?

Converter stations would be built to in each country to change the electricity from HVDC to HVAC and the other way around, so it can move around and between the Irish and French networks.

The proposed subsea cable between Ireland and France would be about 500 km in length.

The existing substations at Knockraha, Cork in Ireland and La Martyre in France were identified as the best locations to connect to the existing transmission system in each country.

The converter station would need to be built in an area close to these locations.

The total length of the HVDC interconnector between the two countries would therefore be about 575 km. This includes the subsea and the onshore cable to the converter station.

Once the electricity had been converted from HVDC to HVAC technology at the converter station it would be transferred to the existing substations in each country.

The cables required for the HVAC and HVDC would all be put underground.

What infrastructure would have to be built for the Celtic Interconnector?

You can see the main elements of the proposed infrastructure in Ireland in the graphic below. It outlines:

Click on the graphic below to view a large version. 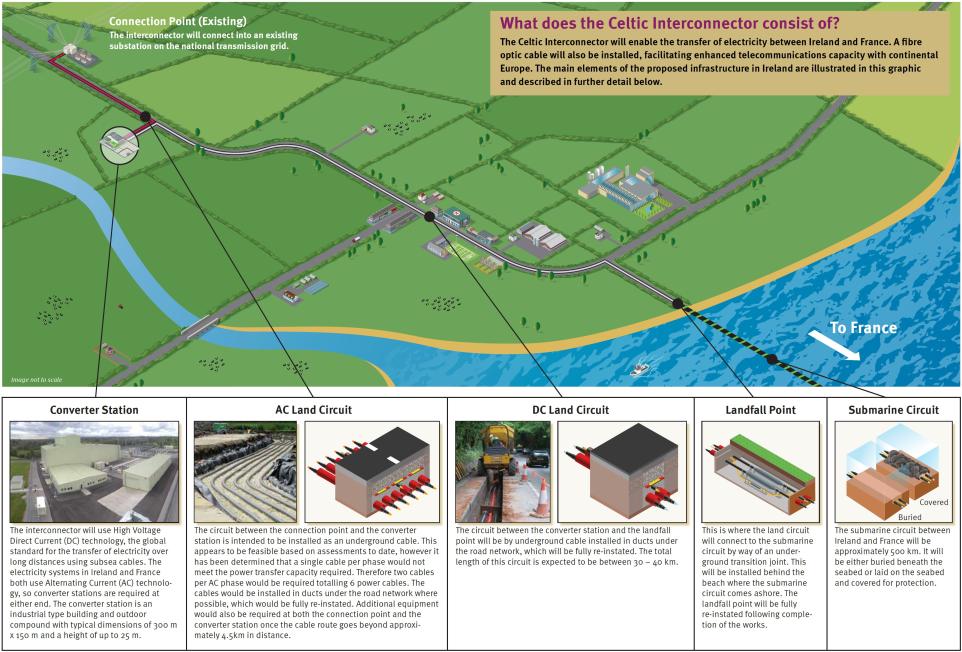 What is a Project of Common Interest?

The EU have partly funded the Celtic Interconnector and designated it as a Project of Common Interest (PCI). A PCI is an infrastructure project that links the energy systems of EU countries. This means it is seen as important and makes access to planning permission and permits more efficient.

As a PCI, the Celtic Interconnector also has access to financial support from the Connecting Europe Facility (CEF) – a fund to develop Europe’s energy, transport and digital networks.

In 2019, EirGrid and its French partner, Réseau de Transport d’Electricité (RTE), were awarded €530.7 million of CEF co-financing to complete the design and construction of the Celtic Interconnector. 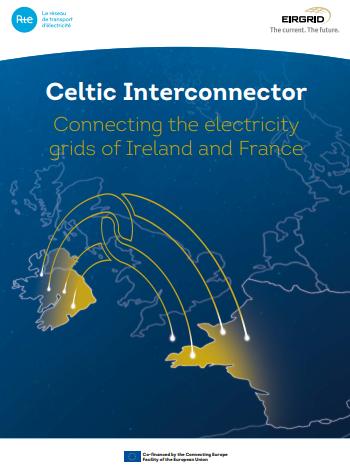 Where can I get more information?

Our booklet, Celtic Interconnector Connecting the grids of Ireland and France, outlines more details about the project and how you can contribute as it develops.

To learn more about PCIs, please go to the Key cross border infrastructure project on Europa.eu.