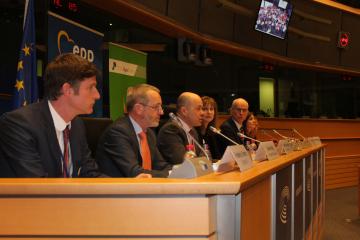 Established in 2017, EU-SysFlex is a consortium of European energy companies, led by Ireland’s electricity grid operator EirGrid. It has been awarded over €20 million by the EU to fund research into the deployment of renewable energy.

The project involves 34 organisations from 15 countries across Europe and has a budget of €26 million. It receives funding under Horizon 2020, the EU’s €80 billion research and innovation programme. EirGrid is the overall project co-ordinator, while French electricity group EDF acts as technical co-ordinator.

Speaking at the launch in the European Parliament, Minister Naughten said: “The EU-SysFlex project will develop a European-level roadmap to detail how the European system can progress to meet world-leading renewables ambitions and large-scale consumer participation in energy.”

EU-SysFlex will identify issues associated with integrating large amounts of renewable energy and provide practical assistance to power system operators across Europe. It will also create a long-term roadmap to facilitate the large-scale integration of renewable energy.

Robin McCormick, Director of Operations, Planning and Innovation at EirGrid, told the audience: “This initiative underpins European Union plans for a greener and more decarbonised Europe by significantly increasing the levels of renewable energy. To that extent, by 2030 we expect the pan-European electricity network to be capable of integrating at least 50% of renewable energy sources. That is a massive increase from where we are now.”